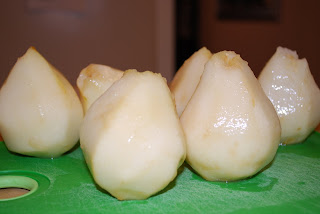 A lot of pears around here lately; funny, since pears are not on my (long) list of favorite fruits. Neither are they a favorite of Ray's, but right now we're both enamored of the pear.
We received a beautiful flat of Royal Riviera pears from Ray's grandpa on December 23rd. He gets them from Harry & David, and they were ripe and fragrant from day one. I was so hungry that afternoon that I snarfed one straight away. I placed the flat in the garage over the holiday, where it stays nice and cold.
~:::~
On December 25th, my mother served this beauty for evening tea: 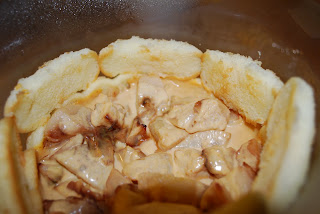 Yea I know, not the best photo ever; I was tripping over myself to receive my plate.
She is called Roasted Apple and Pear Trifle with Cinnamon Creme Anglaise and Pumpkin-Caramel Sauce.

A trifle is traditional in our family on Christmas Day, historically one with bananas, berries, and jam. I found this one on epicurious.com in November and convinced Mom to try it. Oh my goodness- I had two servings because, well, it was Christmas and I wanted to. The pumpkin caramel was insane with the apples and the pears. I can't believe I never realized how great the combination of roasted apples and pears could be. Thankfully it was liked by the rest of the family too, so it is destined for an encore.
After Christmas tea we drove home- which is good because I don't think I could survive under the same roof as those leftovers. 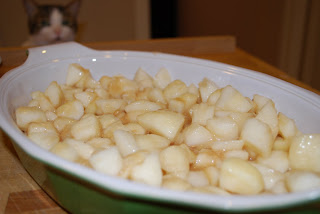 That lazy weekend, I took another look at those pears. They were nice, but neither of the humans were interested in eating them out of hand. I don't think the feline would have been into that either. So my thoughts turned to baking, and here we go- a pear crisp! 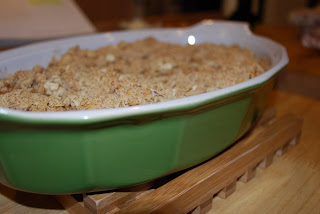 This was a nice little dessert for both of us after the creamy carrot soup.
That was the last I saw of it; the rest disappeared on Ray's breakfast plate. 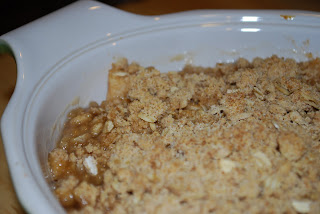 These ripe pears don't hold up as firmly as apples in a crisp, but they are so sweet and smushy. Sort of like making a crisp with applesauce, different but still good. I have four pears left from the original flat. Perhaps a smaller version of the original this weekend? 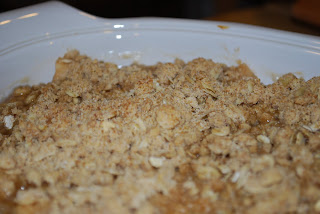 
Preheat the oven to 350 degrees Fahrenheit. Combine the pears, sugar, and salt in a bowl and pour into a pretty baking dish. Set aside.


In a separate bowl, combine the flour, sugars, cinnamon, and oats. Drizzle the melted butter on top and stir with a fork until the crumb topping forms little pebbles. Pour the topping in an even layer over the pears. 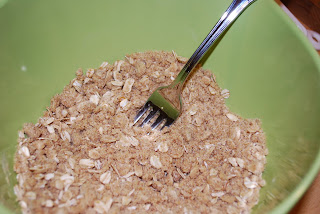 Bake for 30 minutes until the top is golden brown and the pears start to bubble up the sides. Let cool on a wire rack for 10 minutes before serving. 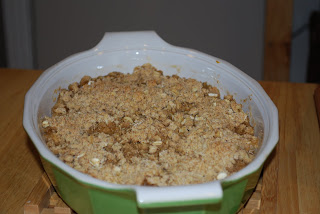 I love fruit filled desserts (I'm so not a chocolate person), especially crisps! Josh is a huge pear fan, maybe I will make this next weekend when we have guests coming :) Or maybe a mixed pear and apple crisp? All sounds good to me. Happy New Year!

hope you're feeling better! umm, that trifle, can we get the recipe? sounds amazing!! :) crisps are one of my favorite desserts, but i have to be careful not to eat all the topping before it gets into the oven!