Be Nice to Your Ahi 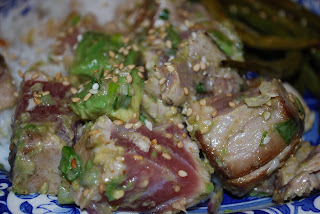 ~ Start with excellent raw materials and treat them nicely,
and you'll be less likely to screw things up ~ 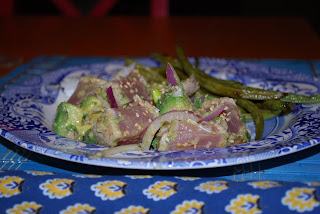 I like to knit in any spare time I have left, using a simple stitch with gorgeous yarn to make a nice scarf. Or going out, it's one beautiful pearl bracelet instead of gobs of costume jewelry. How about a half dozen white tulips? In place of the massive mixed bouquet that is. I hope you're following the theme here. Sometimes a little timidity pays off- less effort, better results!
~
Ray offered to take me out for a birthday dinner, and I adore everything about restaurant dining. A little against nature, I declined in favor of something delicious at home. The beautiful ahi tuna steaks I found at Whole Foods that morning made it a done deal. I prepared this recipe one time in college and the glorious flavors returned to my taste memory when I opened this cookbook. 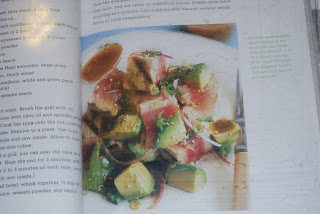 Ina Garten is quite a talented home chef and entertainer, and while I'm not a disciple, she does live by the 'great ingredients, simple preparation' mantra.

Fresh ahi tuna is certainly a treat, but this salad couldn't be easier to throw together. When you see the price of ahi tuna at Whole Foods ($15-$20ish a pound), don't be immediately turned off. I'd like to point out that this is a special occasion, and when you compare it to a meal out, (certainly what this dish would cost for two in a restaurant!), it's actually quite reasonable. 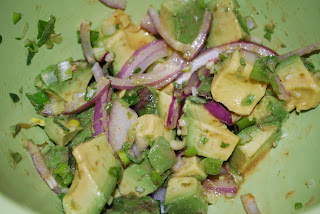 Promise me you won't overcook it!!! This tuna is meant to be seared on the outside and raw on the inside. You're buying quality fish so it's alright to leave it raw, and it's absolutely divine.
If raw fish bothers you, don't make this recipe. 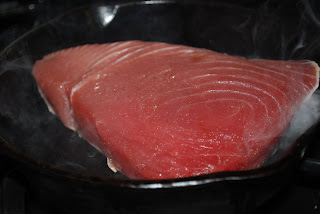 If you're game, you'll be rewarded with an unctuous, expensive-restaurant worthy dish. 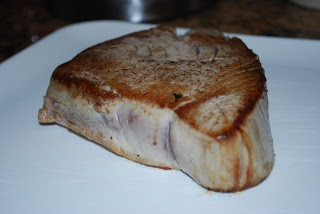 Your seared tuna should look like this on the outside (above), and this on the inside (below). 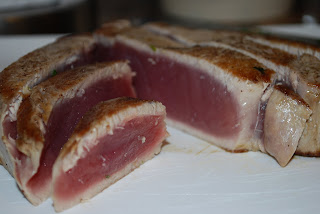 We ate the salad with some steamed rice and roasted green beans (tossed with evoo, salt, and 1 tsp soy sauce, roasted for 20 minutes at 400), and it was heavenly.

There's a good serving of grilled ahi salad left and though I love my husband dearly, we might come to blows over who gets it for lunch. 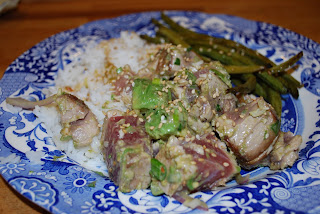 Heat a cast iron skillet over high heat. Brush the tuna with olive oil and generously dust with salt and pepper; repeat on the other side. You can turn the tuna with tongs to prevent dirtying your hands.
Give the skillet a light spray of olive oil spray for extra security, then add the tuna steak. You might want to turn on your kitchen fan, there will get steamy/smoky. Cook for 2 minutes and flip the steak to other side for another 2 minutes. Remove to a plate and allow to cool slightly.
Meanwhile, combine 1/8 cup olive oil, lime zest, lime juice, wasabi powder, soy sauce, hot sauce, and salt and pepper to taste. Toss the avocados with half the vinagrette. Slice the tuna into bite-sized chunks, about 1/4 inch thick. Add the tuna and some of the sesame seeds to the salad and toss to coat with the dressing, adding additional vinaigrette if necessary. Serve at room temperature sprinkled with additional sesame seeds.
~::~
I mixed the dressing for the salad first, and wasn't convinced that I loved it. A quick internet search pulled up an alternative option, so a taste test followed. 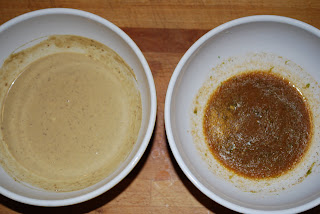 It was good, but much too rich for the light salad I was striving for. In the end I stirred a few teaspoons of the second dressing into the first, et voila! [Comparing the two was interesting, but I will skip that step next time and use the original dressing solo.] 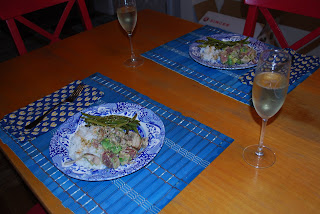 What a beautiful birthday dinner! Josh LOVES ahi tuna and hates when anyone overcooks it. I've made it twice for him now with sesame seeds (black and white) on the outside. Mine looked ALMOST as pretty as yours :)

Happy Birthday! This looks really yummy. I have the cookbook and will try it sometime. Enjoy your birthday weekend.