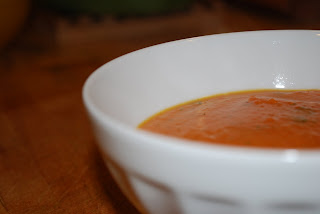 I've been wonderfully healthy this winter, until I brought home a cold on Christmas night.
It took up more room in the car then our gifts. I'm talking the snotty, messy kind of cold that is so very attractive. (I lament, why can't I have one of those colds in your throat that gives you the sexy, scratchy voice? If I feel like crap, at least I could sound cute, am I right?)
On the 26th I headed to Trader Joe's for some provisions. Turns out they'd had a power surge during the night, turning many of the refrigerators off. There were gaping holes where food used to be, so myself and the few early shoppers had to make do with what survived.
I walked in planning a potato leek soup for my snotty cold. No leeks. Lots of potatoes, but no leeks. No spinach either! Grr! What did they have? Carrots. Lots of sweet, pretty carrots.
A pureed carrot soup! That'll do fine, more than fine. I grabbed a large bag of them as well as a large potato, and headed home (with a few other things of course). 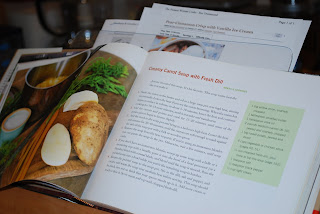 This recipe comes from one of my prettiest cookbooks, Once Upon a Tart by Frank Mentesana and Jerome Audureau. It's filled with beautiful pictures and intriguing recipes, and one of those I tend to forget about for stretches of time before rediscovering it all over again. There are sections for sweet and savory moods; I drool over the soups as much as the tarts. 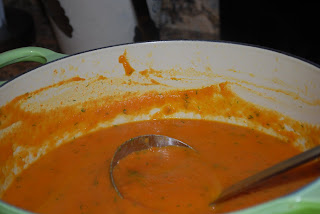 The star of this soup is not the carrots or the dill (the dill is a close runner-up, I love dill)-
it's the immersion blender, aka stick blender, used to puree the soup once it's cooked. 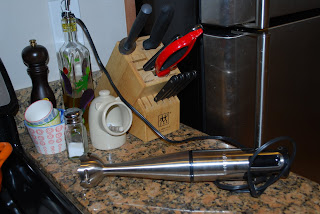 This tool is so awesome, I'm declaring it a new kitchen essential. If you don't have an immersion blender. . . you should get one. If it's a splurge, put it on your Amazon wish list so someone can gift it to you.
In the meantime you could cool the soup a bit before transferring it in batches to a blender. It's a messy step easily avoided if you have this guy. 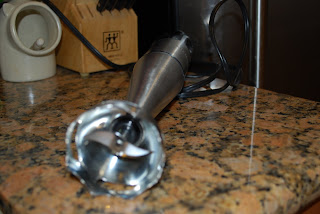 Another friendly tip I'd like to pass along: a little Prosecco while cooking with a head cold helps immensely. 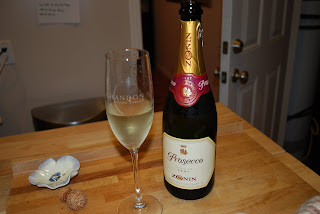 Pureed soups seem extra special to me, in large part because of that extra step. It's so wonderfully easy though, and cheap too! Carrots, onions, and potatoes are inexpensive pantry items. Don't leave out the dill; fresh herbs are special, but you can use the rest of the dill in green salads, tuna or egg salad, and any number of other possibilities.
I was pretty true to the original recipe with the exception of the added cream at the end (I'm sort of anti-cream in soups). I didn't want to steer too far from the original so I added about 1/3 cup of 1% milk (what I had) for a little body and richness. The substitution worked very well, but if you'd like to go for the cream, be my guest! 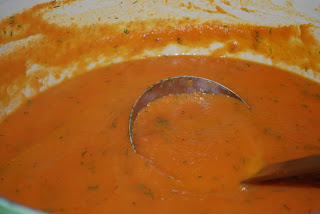 Heat a large dutch oven on the stove over medium high heat. Add the butter and oil, and the onion and saute. Lower the heat if you see the onion browning (*mine browned quite a bit but I don't believe it affected the end product much). Cook for 5-10 minutes, then lower the heat and cook 10 minutes more until the onion is tender and translucent. 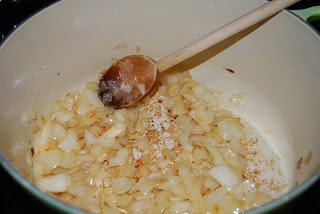 Add the carrots and potato and cook for 20 minutes, until some of the potato starts to brown. 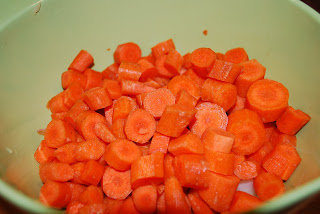 Add the stock to the pot and bring to a boil. Lower the heat and simmer for 30-40 minutes, until the carrots are soft and mashable. Remove the soup from the heat and puree with a stick blender until smooth.

Return the pureed soup to the soup pot. Stir in the dill, salt and pepper, and cream or milk, and warm over medium heat before serving. Ladle into small bowls and garnish with extra chopped dill. 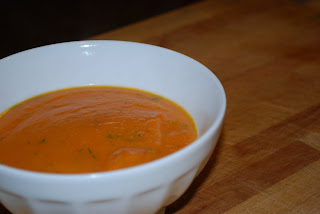 That looks delicious. I've recently fallen in love with carrot soup. I have a recipe for a very simple one (I believe a Paraguayan soup) that I believe is just a mierpoix, stock and cheese and it's fabulous. I love to make it with farmers' market veggies to bring out the simple flavors of the dish.

Hope you're feeling so much better! I hate colds like that (and yes...I always hope for the sexy voice to go with my cold ;)). What a yummy soup. I also have an immersion blender and LOVE it. Happy New Year!

I just got an immersion blender for Christmas and I've bookmarked this soup! can't wait to try, thanks!

I want an immersion blender so badly! Hope you are feeling better.