Needing a little comfort food, my lunch today was inspired by The Peanut Butter Boy and his recipe for PB Parfait. I'm not feeling too great :-( and the texture combo of banana, peanut butter, and yogurt sounded nice to me.

I started (in a tall blue wine glass) with some cut banana. 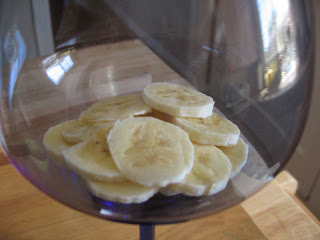 Next, I added some peanut butter. I searched in vain for Peanut Butter & Co's Cinnamon Raisin flavor, but couldn't find it. My Whole Foods supposedly carries it but no where to be found (gonna keep looking). Instead, I used this little packet of Justin's Organic Cinnamon peanut butter. 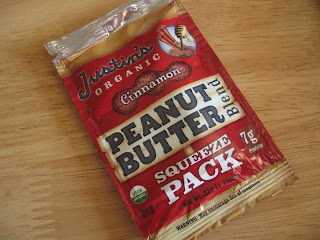 It's one serving, 180 calories; what a great idea for school lunches! I think I used about 2/3 of the packet. Next, I added a little Suite Apple Granola.

Next, some TJ's 0% Greek-style Yogurt, about 5 1/2 ounces. I added half, than some freezer strawberry jam followed by the rest of the yogurt. To garnish, a teeny drizzle of the apple glaze left from the Apple Oatmeal Cupcakes last week, and another sprinkle of granola. 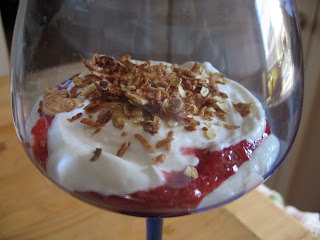 The texture of the yogurt and peanut butter together is fun, sticky and creamy. It made a nice lunch. And if I ever get tired of oatmeal for breakfast... well, not sure that will ever happen, but who knows?

Terrific recipe Peanut Butter Boy, thank you for the inspiration!

Such a lovely parfait (and glass)!! Oh and Peanut Butter Boy's recipes are definitely great :0)

haha that parfait is TOO CUTE. i want one!!

That looks really good, and it must have tasted delicious too!