I hate to say it, but "Where Has the Time Gone?"
SO cliche, but inescapably true.

On August 26, 2007 I was newly married, returned from my honeymoon and back at work. We were settled in our apartment and learning the ins and outs of a new kitchen and some new eating habits. I considered starting a food blog of some sort for a while. Finally taking the plunge, I named it after a favorite and deeply nostalgic dessert.

One year later, I'm so happy to be here. In celebration, I think some birthday baking is in order. What would be more appropriate than an Apple Oatmeal Cupcake? 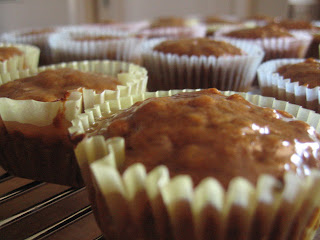 This recipe is an old friend, and it's been more than a year since the last batch.

For a cupcake they are fairly nutritious, from whole wheat flour, oats, and applesauce. They make a delicious breakfast muffin on a special morning.
The glaze has rich flavor from the apple juice concentrate; its optional since the cupcakes are great on their own. The recipe makes a good amount; add extras to plain yogurt, toast, or a bowl of oatmeal. 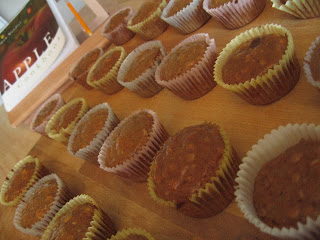 Cream together the butter and sugar in an electric mixer until smooth and fluffy. Beat in the honey, applesauce and eggs.

Fill each paper cup half full with batter. Bake for 20 minutes, rotating halfway through, until a skewer inserted in the center comes out clean. Leave to cool on wire racks while you make the Apple Glaze. 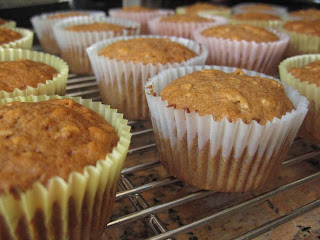 For the Glaze: Mix the cornstarch with a spoon of apple juice in a small saucepan. Whisk to form a smooth paste, then add the rest of the apple juice. Set on the stove over low heat, stirring constantly, until the mixture is smooth and thickened. Add the apple juice concentrate and cinnamon. Continue to whisk, adding additional cornstarch if necessary to keep the mixture thick. Remove from the heat and add the confectioner's sugar if desired. Allow to cool a little before spooning a small amount (1/4 tsp) over each cupcake. 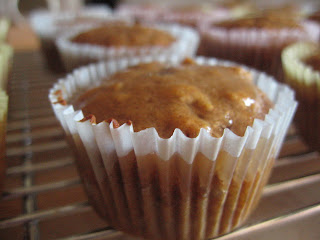 Happy 1st-year bloggiversary!!! Those cupcakes are PERFECT for the occasion :0)

Happy Blogirthday sweetheart. I had two of the Apple Oatmeal Muffins for breakfast today and they are delicious. Perhaps I can bargain with you to take some to work. We'll see. Ray

Happy 1 year! How very exciting! I love this recipe and will put it on my must make list! I have the purses planned for Thursday night and am so excited to try them that they may have to move up to tonight...we'll see if I can hold off ;)