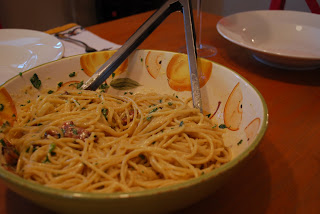 Here's a repeat because I didn't write out the recipe the first time.
Carbonara tastes like a special meal but it couldn't be easier. I can't think why it's not already in the rotation for entertaining. How many people do you know who don't like pasta, eggs, and bacon? I don't think I know any.

Put a large pot of water on the stove to boil.
~
In a large saucier or skillet, cook the bacon over medium-low heat until the fat is rended and the bacon is crisp, 12-15 minutes. Remove the bacon to a plate lined with paper towels, and pour off all the fat but one tablespoon. Add up to a tablespoon of olive oil and add the garlic. Cook until golden brown, then discard the garlic and turn off the heat temporarily.
~
Meanwhile, beat the eggs, cheese, and parsley until frothy in a large serving bowl. Set aside.
~
When the water boils, add the pasta and stir occasionally. When it has just a few minutes left, turn the skillet back on over medium heat, add the white wine, deglaze and reduce. Add the bacon back to the pan and stir well. When the pasta is cooked, drain and add to the serving bowl. Immediately toss the pasta and egg mixture with tongs to incorporate the sauce and coat the spaghetti well. Add the bacon and white wine mixture and continue to toss until well combined.
~
Adjust salt and pepper to taste and serve immediately.
~
This dish is best served immediately on the first day, but leftovers are still great microwaved with a tiny bit of added moisture. 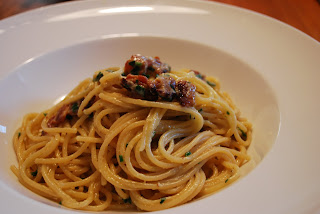 looks fabulous! i don't think i've ever tried to make it at home, but looking at this i can't imagine why :)

Definitely worth repeating. You're the second person I've seen make this lately and now I am definitely craving it!

Also, I’m in the running for a recipe contest and would love, love, love your support if you have a minute. All you have to do is visit the following link and click that you like my video. I would much appreciate it. :0) http://www.youtube.com/watch?v=KCkllXlndi4